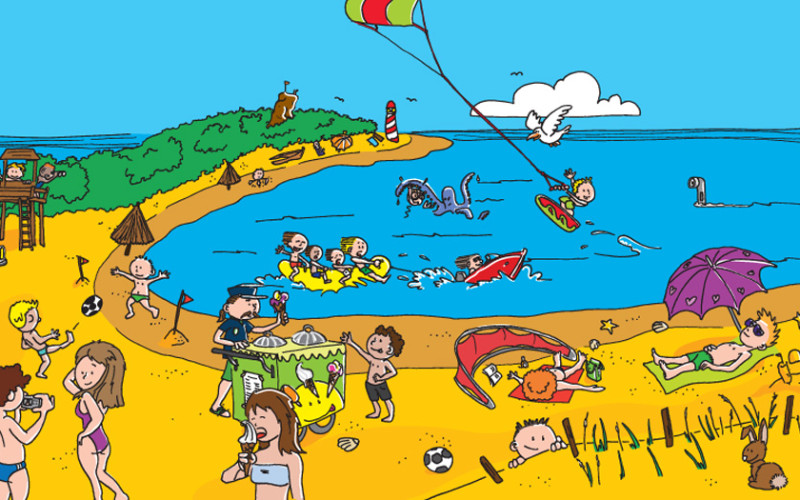 Most of the rural beaches and baths will open on the weekend of Pentecost in compliance with the safety regulations imposed due to the corneal virus epidemic, for the time being only the outdoor pools can be used in the baths. Among the settlements in Lake Balaton, the beaches will open in Balatonalmádi on Friday, May 29, and in Alsóörs and Csopak it is planned to open the next day. In Alsóörs, it will also be possible to exchange tickets via the Internet and a ticket machine will be placed, and in Csopak it is planned to increase the price of the ticket due to the restrictive measures. In Szigliget, the beach will also open at Pentecost, there will be no beach passes, here the price of tickets has been increased by 25 percent.
In Keszthely, you can also bathe on the beaches of Lake Balaton from Pentecost, because although their gates have been opened before, it is only in front of the pedestrians.
The lake bath in Hévíz is already open, the baths in Zalakaros and below are waiting for the guests from May 29, only the outdoor pools can be used in these.
The beach of Harkány Spa will also open on May 29. Spa pools and some services are not yet available and limit the number of visitors. The Siklós Thermal Bath is also waiting for its guests from that day. The outdoor pools of the Hullámfürdő in Pécs will open on May 30, and the beach of the Hertelend Thermal Bath can also be visited from the Pentecost weekend.
The spa complex awaits guests in Bükfürdő from May 29, but the services of the medical department can only be used to a limited extent. The adventure park will open in Sárvár on the 30th, but visitors can use the outside of the spa and wellness bath only from 12 June.
The Family-Friendly Beach and Adventure Bath in Szekszárd is planned to open on July 1.
In Kaposvár, the Virágfürdő is preparing for the full reopening. For the time being, the 50-meter outdoor pool can be used, with a maximum of forty people at a time, five per course, visitors must take a soapy pre- and post-bath. The Barcs spa awaits guests from May 28 and Igalé from May 29.
The Aqua Sports Center and the Hungarian Vilmos Swimming Pool opened in Győr. For the time being, the Lővér swimming pool in Sopron can only be used by sports associations, and the opening hours of the Tómalom bath are now being worked out. The Kapuvár spa will not open this season because compliance with safety measures would result in significant financial losses.
The settlements of Lake Venice have not yet decided on the opening of the beach. In Pest county, the Lupa Beach in Budakalász opened on Friday, the Thermal Bath Leányfalu awaits beachgoers from next Friday, the Nagykáta Spa and Thermal Bath from June 12.
In Hajdúszoboszlón, the outdoor beach of Hungarospa, Europe's largest spa complex, will welcome guests again from May 29, but due to epidemic restrictions, it can only operate with "half houses". In the pools, they help guests keep the right distance from each other even in the water with signs stuck on tiles. In the medical department of the spa, non-water related medical treatments will begin, as the medical pools cannot open yet.
The opening of the new Aquaticum Debrecen Beach is planned for mid-June. 15 pools and 8 slides have been built in the spa complex.
The Lake Bath in Nyíregyháza will receive guests from May 30, and the Park Bath from June 6. In the former, the thermal pool and the children's pool will work in addition to the number of guests, in the latter all water circulating pools and slides will be usable, but some surface experience elements will not be able to work.
The pools of the Gyula Castle Bath can be used from May 30, with a limited number of people. Medical treatments can be used from mid-June, and the 50-meter swimming pool is only open from June. The Liget Spa in Gyomaendrőd is expected to open its outdoor pools on May 29, and the Spa, Park and Adventure Spa in Orosháza-Gyopárosfürdő on June 13.
In the Török Sándor Strandfürdő in Hódmezővásárhely, which opened on May 5, guests can use three outdoor pools, those over 65 between 9 a.m. and 12 p.m. The Szentesi Sports and Recreation Center reopened on May 6, and according to the plans, three swimming pools will be in operation here from Saturday.
The 50-meter pool of the Kecskemét Adventure Bath and Slide Park was opened for junior athletes on May 18, and preparations for the opening of the beach in mid-June have begun. Due to the distance, they can accommodate fewer guests, but ticket prices remain unchanged.
The free beach in Tiszafüred is planned to open in June. The beach will be renovated from 500 million forints, construction is underway, but this will not affect the shoreline. It is interesting that a unique pier system will be set up with slides, sun terraces and a water polo court.

In addition to the two open-air baths in Miskolc, the reduced visitor traffic in Miskolctapolca and Selyemréti, it will be open from May 30. The cave bath in Miskolctapolca has a closed air space, so it still cannot receive bath guests indefinitely.
In Nógrád county, the beach will only open in Bánk in May, the city facilities plan to open it in June. The beach on Lake Bánk will open on May 30. They will open in Balassagyarmat on June 20 and in Pásztó in the second half of June. No decision has yet been made on opening the beach in Salgótarján.
The outdoor beach section of Gyémánt Fürdő will open on June 13 in Tatabánya. 1,891 people can enter the institution at the same time, so it is likely that an entry break will have to be ordered several times. In Oroszlány, the spa will not be opened this summer, because the smaller outdoor part is on the same system as the indoor pools, which cannot be operated according to the rules. In Komárom, the Brigetio Spa starts operating on the Whitsunday weekend, but bathers can only use the swimming pool, the adventure and children's sections, the thermal pools do not accept guests. It is written by MTI

Pentecost was the feast of the Sinai covenant for the Jews at the time of Christ. Then its signs were the roar of the wind and fire, signs of God's presence and the outpouring of grace. The signs of the New Covenant were announced by the prophets in the Old Testament, before the birth of Christ: "I will make a new covenant with you...then...I will give you a new heart and put a new spirit in you...I will put my Spirit in you..." (Ez. 36,25-27; 11 ,19; Jer. 31,31k). John the Baptist also prophesied about the Holy Spirit: "Jesus will baptize you with the Holy Spirit and fire" (Matthew 3:11) Jesus was baptized by John the Baptist, and right after that the Holy Spirit descended on Jesus in the form of a dove. Therefore, in Catholic iconography, the sign of the Holy Spirit is the dove. The subject of the Catholic Pentecost is the fulfillment of the Easter mystery: the coming of the Holy Spirit, the outpouring of his gifts, the new law and the birthday of the Church. It had a vigil until 1956 and an octave until 1969, the Easter period ending with the Saturday following Pentecost. From 1969, Whit Monday already belongs to the mid-year period.[5] Whit Monday is a public holiday in Hungary.

Its origins are the Old Testament Jewish religious holiday, Hebrew in Hebrew, the Day of Remembrance of the Legislation (giving to the lake) and the Feast of the New Bread.

According to the Old Testament, the Lord assigned three major feasts to the Jews. "Consecrate me a holiday three times a year! Keep the holiday of unleavened bread! You shall eat unleavened bread for seven days, as I commanded you, in the appointed time of the month Abib, because that is when you came out of Egypt. Let no one appear before me empty-handed! Then the harvest festival, when you harvest the first fruits of your field's sowing. And the harvest festival at the end of the year, when you harvest the crops from the field. Every man should appear before the Lord God three times a year (in Jerusalem)!” (Exodus 23:14-17)

So the middle one is the feast of Pentecost, it is the 50th day. "Count from the day after the Sabbath, that is, from the day on which you take the sheaf intended for presentation, seven full weeks. Count fifty days to the day after the seventh Sabbath, and then present a new food offering to the Lord!" (Leviticus 23:15-16) “And when the day of Pentecost came, and they were all together in the same place, suddenly there came from heaven a noise like a great gust of wind, which filled the whole house where they were sitting. Then some tongues of flame appeared in front of them, which spread out and landed on each of them. They were all filled with the Holy Spirit and began to speak in different languages; as the Spirit gave them to speak. There were many pious Jewish men in Jerusalem at that time from among all the nations of the earth. When the noise arose, this crowd ran together, and there was a great confusion, because everyone heard them speaking in their own language." (Acts 2:1-6)

The apostle Peter explained to those present that what Joel had prophesied had now been fulfilled: "In the last days, says God, I will fill all mortals with my Spirit, and your sons and daughters will prophesy, and your young men will see visions, and your elders will dream dreams; even on my servants and maidservants I will fill them with my Spirit in those days, and they will also prophesy.” (Acts 2:17-18) Jesus also promised the Advocate whom He would send from the Father, "the Spirit of Truth, who proceeds from the Father, he will testify about me." (John 15:26b). "However, I tell you the truth: it is better for you if I go away; for if I do not go, the Protector will not come to you, and if I go, I will send Him to you. And when he comes, he will reveal to the world what is sin, what is righteousness, and what is judgment. The sin is that they do not believe in me; the truth is that I am going to the Father and you will see me no more; and the judgment is that the prince of this world is judged.” (John 16:7-11) So Jesus filled his Holy Spirit.

It is celebrated on the fiftieth day after Easter known from scripture, on the seventh Sunday after Easter and on the following Monday. Thus, the earliest possible date of Pentecost (in Western Christianity) is May 10-11, and the latest is June 13-14.

Its Greek name (πεντηκοστή, Pentecost) also means 50, and the Hungarian word Pentecost comes from it. Similar to Easter, it lasts all week, but only two days are a public holiday. Although Pentecost is only mentioned as a holiday in the 2nd century by ancient Christian writers (Tertullian, Origen), its celebration is as old as the church, so it dates back to the time of the apostles. The sacrament of confirmation is traditionally celebrated in the Roman Catholic Church starting from the feast of Pentecost. Because of the holiday, the month of May is also called the month of Pentecost, but the seventh Sunday after Easter often falls in June.

Népszokások
There are several customs associated with Pentecost in Hungarian culture. Several of their elements date back to pre-Christian times. It can be traced back to the Roman floralia, which were festive occasions greeting spring when they greeted the goddess Flora, the goddess of flora and flowers (in a broader sense, fertility). The goddess is called Hloriss in Greek, meaning Green, Virulence. Source: Wikipedia